No other grain crop utilizes sunlight as effectively and its yield per hectare is the highest of the grain crops.

Maize is mainly cultivated between the latitudes 55˚N and 45˚S. The crop thrives best when air temperatures in the summer months are between 21-27˚C.

Soils need to be warm enough to ensure good strong emergence with little check in growth. The minimum temperature for germination is 10˚C and at a soil temperature of 16-18˚C, maize normally emerges within a week of planting. Maize does not tolerate waterlogging, so good drainage is essential, especially in temperate regions and on heavier soils.

After emergence, each leaf stage is defined according to the uppermost leaf whose leaf collar is visible. However, from around V6 onwards the lower leaves may die and fall off, so at this stage it is important to count the number of collars on the stem. At early stages of plant development, growth is limited by the size of the leaves and the root system. Early leaf production also affects grain production.

As a result, all nutrients need to be readily available at this time or poor growth will restrict yield. The critical growth stage with respect to crop nutrition is the V6 stage.

While maize can be cropped continually, rotation with other crops helps to increase yields by minimizing disease, pest and weed incidence. Previous crops such as legumes can also reduce the need for nitrogen fertilizer. 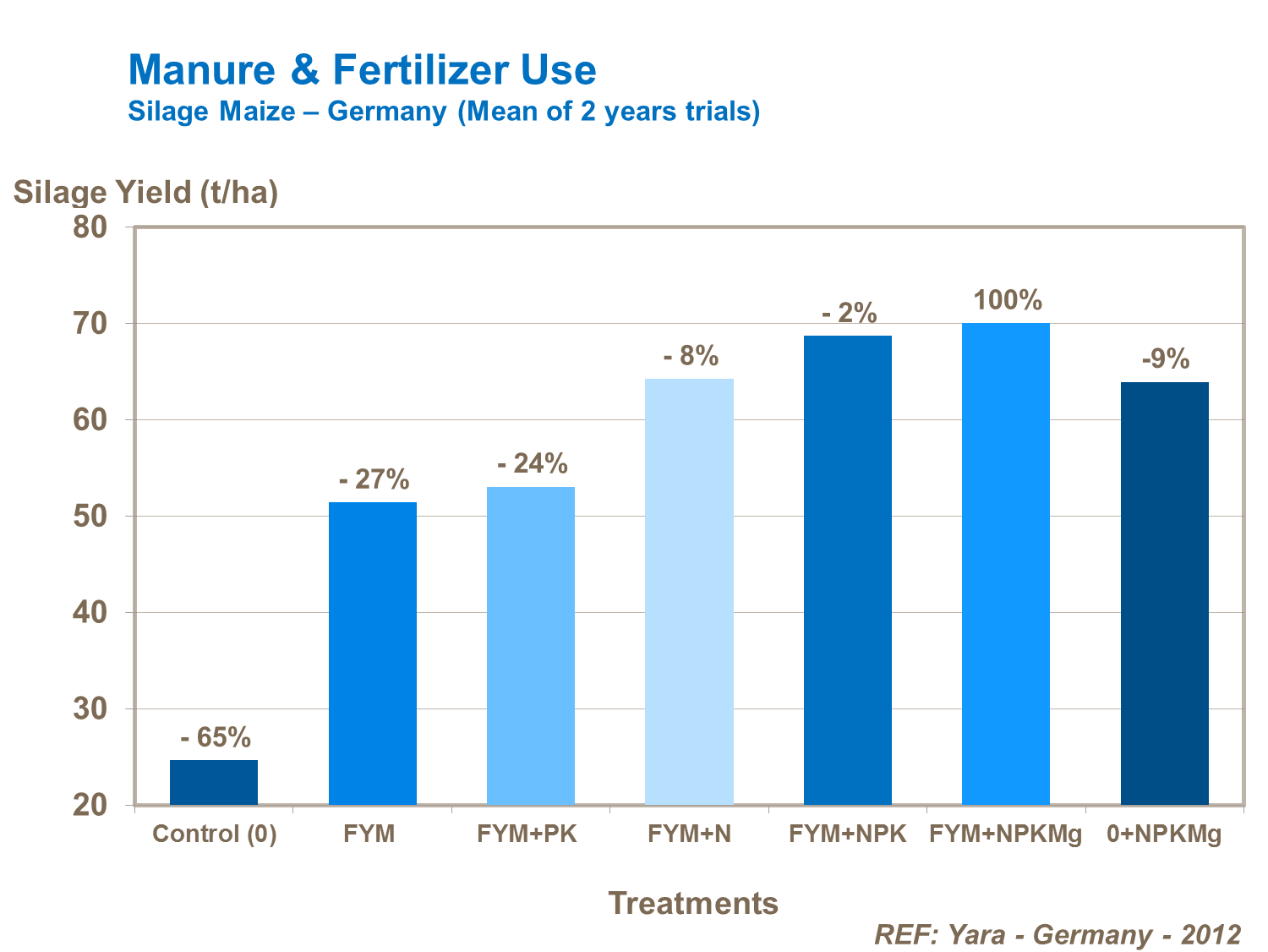 It is important to take into account this residual nutrition when planning a fertilizer programme for the crop. Nutrient shortfalls need to be supplemented and trials show significant responses to applied fertilizer over the use of manure.

Generally, maize is planted 3 to 5cm deep in rows, with spacing governed by harvesting equipment, regional preferences and maize type/end use.

Grain maize is usually grown with row spacings of between 50 to 210cm. Closer row spacing allows plants to exploit more moisture, nutrients, and light earlier due to greater space between plants in the row. 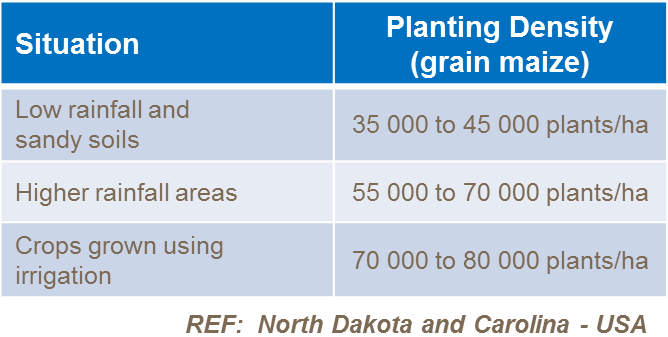 For grain maize grown in more arid regions, crop density can be as low as 25,000 plants/ha and in humid, tropical regions populations can be in excess of 75,000 plants/ha.

In temperate regions, maize for forage is commonly sown at 90,000 to 110,000 seeds/ha and the best crops come from low altitude, sun-facing fields.

It is common practice to plant 10–15% more seed than is necessary to take into account reduced establishment and produce the desired plant population. Germination figures are usually around 95%, and another 5–10% of seeds may be lost to insects, disease, or weeds.

Grain maize is harvested when grain has dried down to an appropriate level. Once this has been achieved crops can be left in the field and harvested at a later date.

In some cases, particularly more temperate climates, harvested grain needs to be dried to 15% moisture or less, before it is stored in order to maintain grain condition and reduce mycotoxin build-up such as, aflatoxin.

Maize for silage is taken when the plant is still green and the grain is less mature than that required for grain maize. The ideal harvest timing is at 28-35% DM or when the grain reaches the half milk line stage – this provides the best compromise in terms of silage quantity and quality.

Crimping, where the maize is left in the field until later and just the grain is harvested and run through a crimper before being ensiled, provides a high energy feed without the need for drying it down to levels of that required for storing grain maize.

Corn Cob Mixing, is an alternative harvest method using a combine with an adapted header to harvest corn and part of the cob. This mix is then ground and ensiled. It allows the maize to be taken earlier and provides an alternative high energy feed.