Any maize cob abnormality needs to be analysed before it can lead to severe maize yield losses.

Phosphorus deficiency can cause the maize cob to be defective, by taking on a distorted, twisted appearance with poor grain set at the point of the cob. 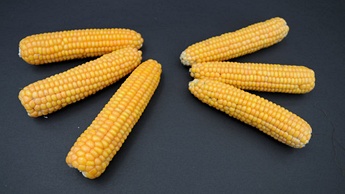 Potassium deficient plants, show cobs smaller in size and can have incomplete maize grain set at the tip end.

Boron deficient grain set are restricted, with the maize cob having many missing kernels and a few large grains.