When young maize leaves turn pale yellow or light green, have thin stalks and are slow to come to flower, it might be a nitrogen deficiency.

The older plants exhibit a "V – shaped" yellowing at the tips of leaves and older leaves show symptoms first, with these tips and mid-ribs eventually senescing. 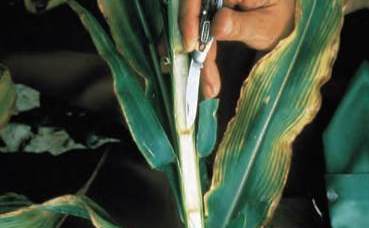 Light green or streaked with yellow leaves can indicate a potassium deficiency. This yellowing or "scorching" of the leaf margins, more common on the lower leaves, turns to necrosis, and in older plants, leaf tips and margins turn brown.

Older leaves which develop a yellow/white interveinal chlorosis are often a symptom of magnesium deficiency.

Sulphur deficient plants are stunted with pale green to yellow leaves. Leaves commonly take on a striped appearance with light yellow coloured veins. Lower leaves can remain green, in contrast to nitrogen deficiency, where they are the first to chlorose.

If maize plant growth is reduced and there is a characteristic chlorosis between the veins of the younger, upper leaves, the plant most probably has an iron deficiency. The appearance of a pale yellowish green chlorotic stripe near the leaf base – or on each side of the mid rib are the first signs of a zinc deficiency. Silking, tasseling and maturity are delayed, leading to reduced yield. Zinc deficiency is increased on calcareous soils with high pH and high levels of phosphorus. Of all the micronutrients, zinc is most likely to be needed in maize, with deficiencies most commonly detected between the V2 to V8 stage.

If the plant has a copper deficiency, the young leaves are yellow or light green and at later stages of growth these leaves curl and the leaf tips wilt, turn white-grey and die.

Under severe manganese deficiencies, young and medium formed leaves have uniform, white-yellow stripes in the midsection of the leaf. The stripes become necrotic with the dead tissue falling out of the leaf. Symptoms are similar to those for iron, and leaf tissue analysis is needed to confirm the deficiency. Manganese deficiency is most likely to appear on highly weathered tropical soils, particularly well aerated soils.